Quotes on the love of books.


"I cannot live without books."
Author of the Declaration of Independence, Thomas Jefferson to John Adams 1815 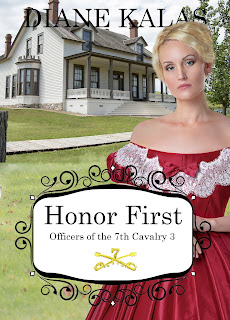 HONOR FIRST, Officers of the 7th Cavalry 3, the last book in the Custer story ON SALE for a short time: E-book $0.99


Read about the events happening at Fort Abraham Lincoln, Dakota Territory 1876, as the famous 7th Regiment of Cavalry prepares to deploy on the tragic historic campaign!
Posted by Diane Kalas at 7:56 AM No comments:

THE STORY OF COMANCHE, a true warhorse and sole survivor of Little Bighorn River Valley Battle

Dictionary definition of warhorse: A warhorse is a government issue horse at a cost of $90 in 1876, well-trained by cavalrymen and used for mounted warfare.

"There is many a warhorse who is more entitled to immortality
than the man who rides him." General Robert E. Lee

Comanche, the warhorse belonging to Captain Myles Keogh, was one of many wounded Seventh Cavalry horses found scattered over the battlefield June 27, 1876, two days after the horrendous conflict in the Little Bighorn River Valley. Badly wounded by arrows and bullets, the horse received three severe life-threatening wounds: through his neck, through his front shoulder and to his hind quarter, and four flesh wounds. His saddle slipped under his belly and the bit dangled from a broken cheek strap and throatlatch keeping the headstall from slipping off. Exhausted, Comanche limped toward the burial detail.


Why was Comanche chosen by the Sevenths enlisted men to spare the horse from being euthanized, to end his suffering, as so many were that day? After all, the odds were against Comanche surviving the transport back to Fort Lincoln, a journey of 710 miles. The battlefield was cactus studded and uneven rock-strewn land, 15 miles away from the anchored Far West river steam, waiting to transport wounded troopers. How did they get the horse to the Missouri River and then onboard the vessel?


There are two possible reasons for why the enlisted men worked so hard to accomplish their goal, to save Comanche, that has puzzled historians. One thought centered on the troopers who may have recognized Captain Keogh’s mount, an Irish officer they respected, and decided to give aid to his mount. Or, the reason the Seventh’s men felt so strongly about Comanche’s survival was because he was still standing! They found him wandering the battlefield after two days without water in the heat of summer and burdened with equipment still hanging on him after he lost his rider, Captain Keogh. Comanche was admired for his bravery and toughness.


First, they had to try and stop the horse from bleeding to death on the battlefield. The Seventh was without a veterinary surgeon as Carl A. Stein was on detached duty and not with the regiment for that spring campaign of 1876. Often in an emergency when a veterinarian was unavailable, farriers and blacksmiths would be called upon or the troopers themselves would handle the situation. The enlisted men made a simple travois, the kind used by Plains Indians, consisting of a tarpaulin with ropes and fastened two trailing poles that supported Comanche. They attached the travois to two strong mules and dragged the wounded Comanche those 15 miles with as much care as possible.


Once the troopers got permission from Captain Marsh to allow Comanche onboard the Far West, the men made a stall near the rear paddle wheel with a soft bedding of fresh cut grass on which to lay the wounded horse. The troopers were encouraged, even invigorated with their success on behalf of Comanche after the Army was so badly beaten and defeated in battle. One severely wounded cavalry mount had a chance to survive, against impossible odds.


Comanche’s recuperation took a full year, almost entirely suspended in a sling with a little space between the floor and his hoofs. Afterward, he was relieved of duty and allowed to roam free at Fort Abraham Lincoln, Dakota Territory. When enlisted men saw women and children riding Comanche, they met with Colonel Samuel D. Sturgis, post commander of the Seventh Cavalry who lost a son with Custer, and requested that Comanche not be ridden again by anyone. The troopers request was granted, and a formal Order was written and posted. Thereafter, Comanche’s favorite hangouts were the officers’ mess and the enlisted men’s club where he occasionally obtained a bucket of beer from his supporters. At parades and ceremonies, Comanche became the regimental mascot and led his old Troop “I,” draped in mourning with a black net and unoccupied saddle with the symbolic empty boots reversed in the saddle stirrups.


Comanche accompanied the regiment on its moves from Fort Lincoln to Fort Totten, and Fort Meade, and his final pasture at Fort Riley. His caregiver was Farrier, Gustav Korn for fourteen years, until Korn was killed in action at Wounded Knee, South Dakota, December 29, 1890. Following the death of Farrier Korn, Comanche lost interest in life and he declined. He died November 6, 1891, of an attack of colic. Comanche was called “Second Commanding Officer” and was nearly 29 years old when he passed into history.


The troopers of the Seventh Cavalry wanted Comanche preserved, but couldn’t afford the fee of $400 (That $400 in 1876 equals over $9,000 in 2020). Professor Dyche, a naturalist connected with the University of Kansas, Dyche Historical Museum, offered to pay a taxidermist if they could display the “sole survivor” of Custer’s last campaign. The troopers agreed. Comanche has been drawing tourists ever since 1892, a silent symbol of the love and devotion cavalrymen have for their mounts. Comanche was on exhibition at the World’s Fair at Chicago in 1893, where he was viewed by thousands of persons. To quote General E. S. Godfrey, “Comanche still lives.”


Comanche’s early years: Comanche was five years old in 1868 when purchased by the U.S. government and given to Captain Myles Keogh as a field mount, reserved for battle action. He weighed 925 pounds and stood 15 hands high. Terminology used today would classify Comanche as a buckskin bay gelding, as he was a mixture of yellow and red coloration with a predominance of red, with a black mane and tail. Some reference books used the term “clay bank,” which is now an obsolete description.


Comanche’s first war wound: September 13, 1868, in a fight against Comanches near the Cimarron River. Comanche was hit in the right quarter by an arrow.


Comanche’s second war wound occurred in June 1870, in another fight against Native Americans. His right leg sustained a superficial wound that kept him lame for a month.


Comanche’s third wound occurred January 28, 1873 in the right shoulder when he was shot by Kentucky moonshiners. His injury was superficial, and he recovered rapidly.


To learn about Comanche’s Restoration and Conservation Project in 2004, check out the University of Kansas Natural History Museum. Afterward, the museum began exhibiting Comanche in a new exhibit where the horse remains today as a popular attraction.


Utley, Robert M., CUSTER BATTLEFIELD: A History and Guide to the Battle of the Little Bighorn, Washington, D.C., 1988

Captain Keogh served in the Indian Wars and was killed with brevet Major-General George A. Custer and 265 troopers of the 7th Cavalry in the battle against the Lakota Sioux and Northern Cheyenne on the Little Bighorn River Valley, Montana, on 25 June 1876. Of the 845 soldiers in the 7th Cavalry at that time 136 were Irish born, mostly privates and non-commissioned officers; Captain Myles Walter Keogh was one of the few Irish officers.


Elizabeth Custer’s last good-bye to her husband, Lieutenant Colonel George A. Custer, May 18, 1876.


“With my husband’s departure my last happy days in garrison were ended, as a premonition of disaster that I had never known before weighed me down. I could not shake off the baleful influence of depressing thoughts. This presentiment and suspense, such as I had never known, made me selfish, and I shut into my heart the most uncontrollable anxiety, and could lighten no one else’s burden. The occupations of other summers could not even give temporary interest.”


Custer, Elizabeth B., BOOTS AND SADDLES, or Life in Dakota with General Custer, New York, Harper & Brothers, 1885
Posted by Diane Kalas at 9:49 AM No comments:

I dedicated HONOR FIRST, Officers of the 7th Cavalry, the final book in my 3-book series to U.S. military spouses. Life on the Great Plains was difficult in so many ways for both the men and their women and I admire them.

This is an excerpt from HONOR FIRST showing how Libbie Custer kept her sense of humor when she made a comment to the heroine, Eve Sanderson, in HONOR FIRST. "Two things are most important to be a good Army wife on the Great Plains: Patriotism and chickens. Absurd though it sounds, it's true. Being patriotic is the belief that we wives are a big part of the history taking place on the Plains, and we're proud of that fact. Having chickens means your table is enviable to those who didn't think of it!"

The cover of HONOR FIRST, Officers of the 7th Cavalry Series 3, features the 1989, rebuilt home and command headquarters for the famous 7th Cavalry. This was George and Libbie Custer’s first home built for them by the U. S. government, and the reassembled 7th Cavalry Regiment since it was formed after the Civil War. Location is Fort Abraham Lincoln, across the Missouri River from Bismarck, Dakota Territory (North Dakota today).

The Fort Abraham Lincoln Foundation raised funds and constructed the home after years of research and planning. The estimated total cost to develop Cavalry Square was $6 million, with $2 million appropriated by the U. S. Congress. The Custer House cost almost $400,000. The North Dakota Parks and Recreation Department now operates the Fort Abraham Lincoln State Park.

As the centerpiece of Fort Abraham Lincoln, the Custer house is the third built on the exact same lot as the original Custer residence. The first was built in 1873, one of seven buildings that formed Officers’ Row on the fort’s western perimeter. The Custer home is in the center of three duplexes for bachelor officers or married officers.

Fire destroyed the original house in the middle of the night in February 1874. George and Libbie barely escaped with their lives. Donations quickly replaced just about everything they lost. Libbie called their frontier home elegant, especially after she requested the installation of the bay window in her parlor, and George provided funds for the railing to the second story (balustrade) made of butternut, a difficult wood that required 80 hours of labor to construct.

Posted by Diane Kalas at 1:10 PM No comments:

The completed Officers of the 7th Cavalry series! HONOR FIRST, an Inspirational Historical Romance Set in the West. A must read for history lovers. 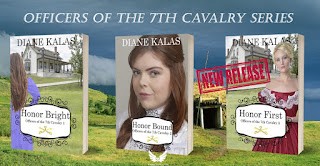 Posted by Diane Kalas at 3:28 PM No comments: